Identifying The Drivers of Urbanization

We attempt to understand the range and relative importance of the multiple biophysical and socioeconomic determinants that influence urban form and patterns of urban expansion.

In order to capture and represent these drivers at the local level, we create land change models combining high-resolution remote sensing data with economic and demographic data (Seto & Kaufman, 2003)  Countrywide and regional studies involve a multi-level modeling approach capable of integrating variation that originates from multiple spatial scales and levels to evaluate the relative impact of policies and factors across administrative and spatial scales (Jiang et al., 2012)  At the global level, the urban land teleconnections (ULT) framework aims at advancing conventional conceptualizations of urbanization and land, identifying and examining the processes that link urbanization dynamics and associated land changes that are not necessarily co-located (Güneralp et al., 2013)

The main drivers of land conversion vary regionally in importance.  Annual GDP growth per capita drives approximately half of observed urban land expansion in China, whereas urban population growth plays a bigger role in India and Africa (Seto et al. 2011). Much of urban expansion, however, may be due to factors difficult to observe comprehensively at the global level, including international capital flows, the informal economy, local land use policy, and generalized transport costs (Seto et al. 2011). The importance of examining the interaction among multiple factors when crafting urban growth policies cannot be understated (O’Mara & Seto, 2014). 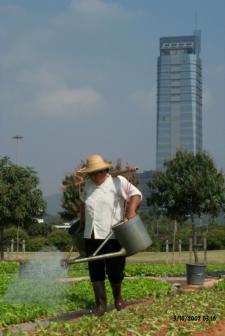 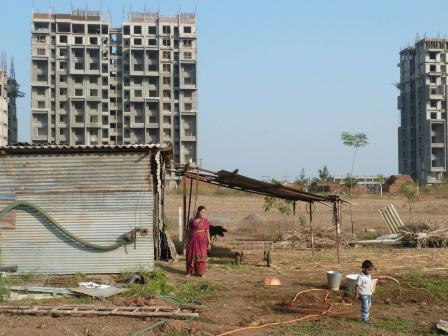 Economic reforms and trade policy since the 1980s, combined with ­concurrent technological changes, have opened up parts of the developing world to unprecedented levels of foreign direct investment. This infusion has transformed regional economies, cultures, political systems, and the local environment. This chapter discusses how foreign direct investment in Bangalore, India, has served not simply to fuel rapid growth in urban population and urban extent but also has strongly affected regional planning and infrastructure policy. Bangalore’s and India’s political history plays an instrumental role, directly or indirectly creating incentives for industry and middle-class workers to decentralise into self-contained landscapes at the urban periphery. We argue that policy and planning approaches must understand and consider the legacies of local and national policies, measure how and why private capital is reshaping urban space, and incorporate private-sector actors into sustainable development discussions.

To date, many geography studies have identified GDP, population, FDI, and transportation factors as key drivers of urban growth in China. The political science literature has demonstrated that China’s urban growth is also driven by powerful economic and fiscal incentives for local governments, as well as by the political incentives of local leaders who control land use in their jurisdictions. These parallel but distinct research traditions limit a comprehensive understanding that can result in partial and potentially misleading conclusions of urbanization in China. This paper presents a spatially explicit study that incorporates both political science and geographic perspectives to understand the relative importance of hierarchal administrative governments in affecting urban growth. We use multi-level modeling approach to examine how socio-economic and policy factors – represented here by fiscal transfers – at different administrative levels affect growth in “urban hotspot counties” across three time periods (1995–2000, 2000–2005, and 2005–2008). Our results show that counties that are more dependent on fiscal transfers from the central government convert less cultivated land to urban use, controlling for other factors. We also find that local governments are becoming more powerful in shaping urban land development as a result of local economic, fiscal, and political incentives, as well as through the practical management and control of capital, land, and human resources. By incorporating fiscal transfers in our analysis, our study examines a factor in the urban development of China that had previously been neglected and provides an improved understanding of the underlying processes and pathways involved in urban growth in China.

This paper introduces urban land teleconnections as a conceptual framework that explicitly links land changes to underlying urbanization dynamics. We illustrate how three key themes that are currently addressed separately in the urban sustainability and land change literatures can lead to incorrect conclusions and misleading results when they are not examined jointly: the traditional system of land classification that is based on discrete categories and reinforces the false idea of a rural–urban dichotomy; the spatial quantification of land change that is based on place-based relationships, ignoring the connections between distant places, especially between urban functions and rural land uses; and the implicit assumptions about path dependency and sequential land changes that underlie current conceptualizations of land transitions. We then examine several environmental “grand challenges” and discuss how urban land teleconnections could help research communities frame scientific inquiries. Finally, we point to existing analytical approaches that can be used to advance development and application of the concept.

This paper uses a content analysis of the published literature to take stock of current understanding of key social and policy drivers of migration to cities in 11 Asian and African mega-deltas and identifies commonalities and differences among them. The analysis shows that migration to urban centers in mega-deltas is an outcome of many forces: economic policies and incentives, local and destination institutions, government policies to develop small towns, and the geographic concentration of investments. Massive influx of capital to many deltas has transformed the local economic base from a primarily agricultural one to a manufacturing and processing economy. This has created uneven spatial economic development which is the underlying driver of migration to cities in the mega-deltas regardless of geographic context or size. Going forward to 2060, one critical challenge for all the deltas is to increase the labor skill of their workforce and foster technology innovation. Continued economic growth in these regions will require substantial investments in education and capacity building and the ability of urban centers to absorb the migrant labor pool.

In lieu of an abstract, the following is a chapter excerpt:

As we enter the 21st century, the world is becoming increasingly urban, both in terms of human population and the Earth’s surface. Although cities have existed for centuries, urbanization processes today are different from those in the past in three significant ways. First, the magnitude of urbanization is extraordinary. The global proportion of urban population was a mere 13% in 1900 (UN, 2006). It rose gradually to 29% in 1950. By 2030, the world’s urban  population is expected to nearly double from 2.86 billion in 2000 to almost 5 billion.
…Second, the rapidity with which landscapes and populations are urbanizing is faster than during other periods in history. China and India, the two most populous countries in the world, regard urbanization as a critical component of their development process and have ambitious goals to build a vast network of new cities to fuel their industrialization goals (Song & Ding, 2007; Kennedy 2007).
…A third characteristic of the urban transition underway today is that it will take place primarily in Africa and Asia (UN, 2006). Whereas the urbanization levels in the Americas and Europe are already high, 80% in South America and 75–78% in Europe and North America, the urban populations in the continents of Africa and Asia are less than 40% of total population. Over the next two decades, the urban populations of both continents are expected to increase to more than 50%.
Karen C. Seto; Paolo Gamba; Martin Harold
Global Mapping of Human Settlements: Experiences, Data Sets, and Prospects: 3-9
Reilly MK, O'Mara MP, Seto KC.  2009.  From Bangalore to the Bay Area: Comparing transportation and activity accessibility as drivers of urban growth. Landscape & Urban Planning. 92(1):24-33.

What determines urban growth and how do these factors vary globally? An understanding of the factors that drive urban spatial form will be critical for urban—and ultimately environmental—sustainability. We hypothesize that easy access to economic or social activity is a primary driver of urban form. From this, a city’s spatial form is largely determined by the time–cost of access to transportation and activities. We use a stochastic pixel-based model to test the hypothesis of accessibility-driven urban growth using two case studies: Silicon Valley, U.S., and Bangalore, India. This study is the first to develop a spatially explicit modeling approach to urban growth in a comparative framework spanning the developed and developing world. Our analysis shows that Silicon Valley’s relatively inexpensive auto-based transport (in time and financial costs), dispersed employment locations, and high labor force participation rates have resulted in intermittent and expansive highway-oriented urban growth patterns. In contrast, Bangalore’s expensive non-auto transport (in time and financial costs), low participation in the formal economy, and emphasis on informal economic activity has produced a tighter clustering of urban development near existing urban locations. Over time, generally decreasing transport costs in both locations have led to increased dispersion of urban development. Economic growth in India and the inflows of IT-related foreign investment in Bangalore may further create urban forms increasingly similar to those found in the Silicon Valley. The results have important implications for the development of policies that may lead to more sustainable forms of urban development.

This chapter describes work that links multiple data sources and research perspectives to advance understanding of the dynamics and human causes of land use change, particularly urban growth, in the Pearl River Delta of southern China and the Red River Delta of northern Vietnam. Thus far, the research effort has concentrated on three interrelated questions:

The chapter includes discussions of completed and ongoing research in the context of theoretical frameworks, methods used, and lessons learned, including a description of the two study regions; the history of the projects; the assembly and processing of remote sensing, spatial, field, and survey data; and conceptual and methodological challenges in implementing the research.

The majority of studies on Chinese urbanization have been focused on coastal areas, with little attention given to urban centers in the west. Western provinces, however, will unquestionably undergo significant urban change in the future as a result of the ‘Go West’ policy initiated in the 1990s. In this paper the authors examine the relationship between drivers of urban growth and land-use outcomes in Chengdu, capital of the western province of Sichuan, China. In the first part of this research, remotely sensed data are used to map changes in land cover in the greater Chengdu area and to investigate the spatial distribution of development with use of landscape metrics along seven urban-to-rural transects identified as key corridors of growth. Results indicate that the urbanized area increased by more than 350% between 1978 and 2002 in three distinct spatial trends: (a) near the urban fringe in all directions prior to 1990, (b) along transportation corridors, ring roads, and near satellite cities after 1990, and, finally, (c) infilling in southern and western areas (connecting satellite cities to the urban core) in the late 1990s. In the second part of this paper the authors connect patterns of growth with economic, land, and housing market reforms, which are explored in the context of urban planning initiatives. The results reveal that, physically, Chengdu is following trends witnessed in coastal cities of China, although the importance of various land-use drivers differs from that in the east (for example, in the low level of foreign direct investment to date). The information provided by the land-use analysis ultimately helped tailor policies and plans for better land management and reduced fragmentation of new development in the municipality.

This paper estimates econometric models of the socioeconomic drivers of land use change in the Pearl River Delta, China. The panel data used to estimate the models are generated by combining high-resolution remote sensing data with economic and demographic data from annual compendium. The relations between variables are estimated using a random coefficient model. Results indicate that urban expansion is associated with foreign direct investment and relative rates of productivity generated by land associated with agricultural and urban uses. This suggests that large-scale investments in industrial employment, rather than local land users, play the major role in urban land conversion.